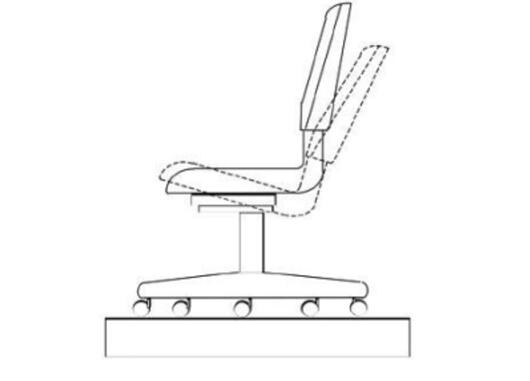 I(back and seat can retreat at the same time) 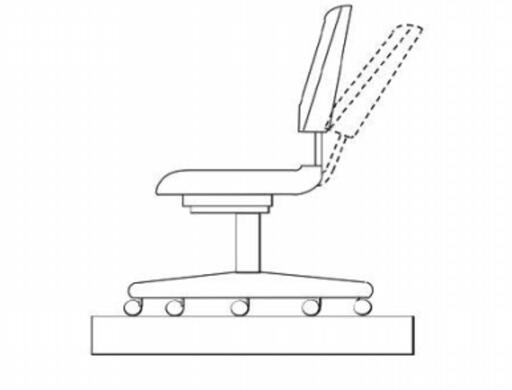 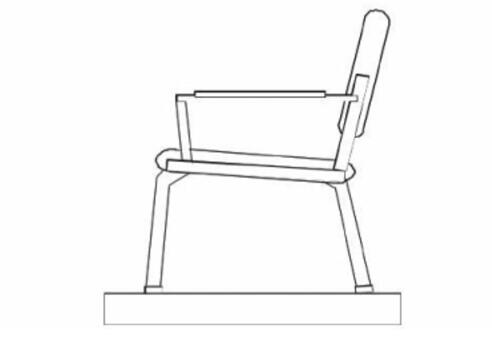 (the back and the seat are fixed and cannot be reclined)

Back static strength test (for type I chairs)

1. Put the chair vertically on the test platform, fix the wheel, the back and the armrest need not be fixed;

2. If the chair has any tuning function, except that the back height must be adjusted to the maximum or 406mm (16.0′′) (minimum of the two), the rest are adjusted to the values under normal use.

Determine the method as follows:

(3) If there is a rotating axis behind the chair, and the axis and the vertical backward angle ≤30°, The points are identified as (a) and (b), and vice versa, the point is located at the axis of rotation of the seat back. As shown in Figure 3

(4) When the seat back is in the maximum reclining position, the force direction should be 90°± 10° with the back (Figure 4)

Note: When the design of the chair does not allow the load to transfer force to its bearing surface, a height of 89mm ± 13mm may be used to extend the bearing surface.

(6) test requirements: In the case of the institution is not locked, the chair back to the maximum tilt angle and fixed, and then loaded as follows:

Force F=890 N (91Kg), time T=1 minute, After the test, the function of the chair is normal, otherwise it is deemed as unqualified

Force F=1334 N (136Kg), time T = 1 minute, After the test, the structure of the chair can not be changed or damaged greatly, and the function is acceptable.

a) Place the chair vertically on the test bench, securing the wheels, but not the back and armrests.

b) If the chair has an adjustment function, except that the height of the seat back needs to be adjusted to the maximum or 406mm (16") (minimum of the two), all items are adjusted to normal use levels.

c) After step 2 is completed, two points with a distance of 406mm (16") and 452mm (17.8") from the height of the seat are determined on the vertical center line of the seatback. The determination method is as follows:

(c) If the back surface of the chair has an axis of rotation and the angle of backward inclination is 30° with the vertical direction, it is determined that the point is the same as (1) and (2); otherwise, the point is located at the axis of the back rotation. As shown in Figure 3

d) When the seat back is at the maximum tilt angle, the force direction should be 90°± 10° with the back (as shown in figure 4)

Note: When the design of the chair does not allow the load to transfer force to its bearing surface, a height of 89mm ± 13mm may be used to extend the bearing surface.

When the mechanism is not locked, adjust the back of the chair to the maximum tilt angle and lock it. Then press the step to load:

After the test is completed, the functions of the chair are used normally. If a malfunction occurs, it is considered as unqualified.

(B) Inspection and testing

After the test is completed, there must be no major changes or damage to the structure of the chair, but functional problems may be acceptable. 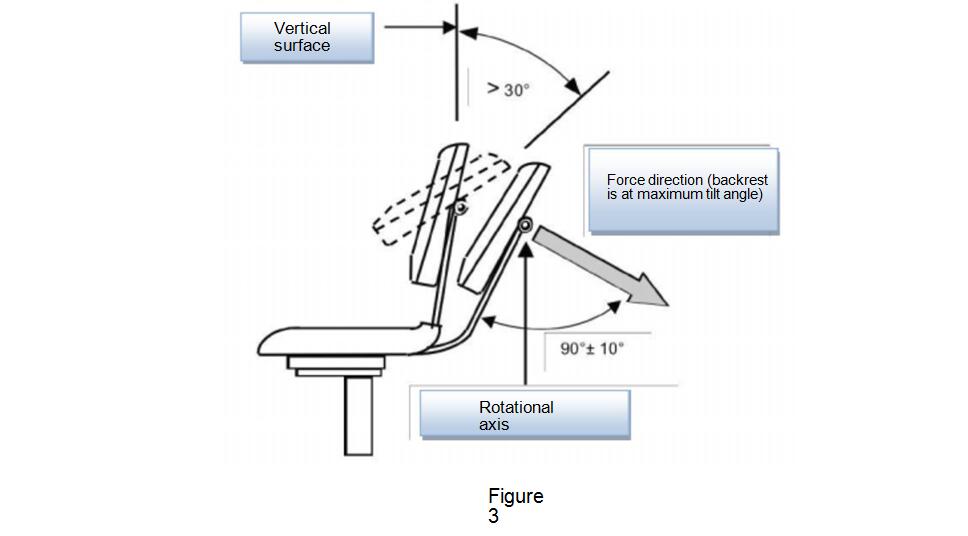 Remove the casters or pulleys, retain the handles, and place them in the slots. The height of the handles should be at least five.

(Install as shown in the figure below); If the pulley is not removable, fix it with something 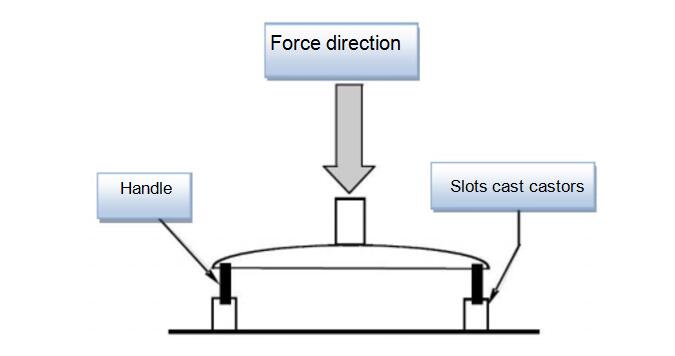 d) The grooves of the fixed casters must be equal to the height of the original casters.

1 chair on the test bench;

2 If the chair seat has a lifting function, adjust it to the highest; if there are other adjustment functions, adjust it to normal use; the chair with wheels adjusts the wheels to the worst state of stability (usually 90° to the chair support) position)

3 Place a sandbag with a diameter of approximately 400 mm (16") directly above the seat. The distance between the sandbag and the back of the seat should not be more than 13 mm (0.51"), but you cannot touch the back of the chair in a fall. See the figure below. 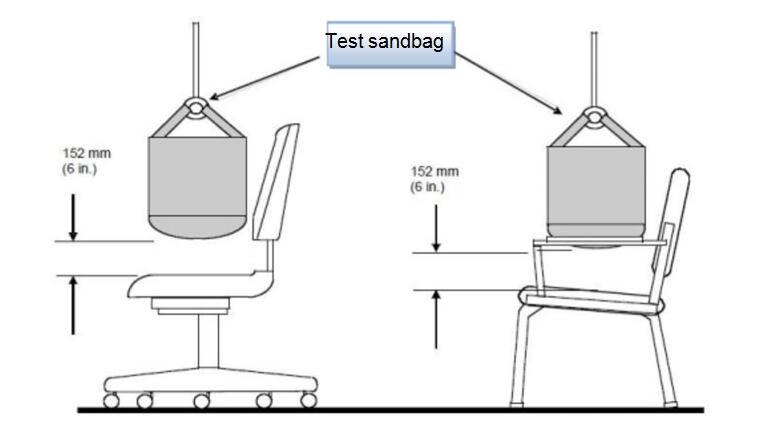 4 test requirements are as follows:

B. If the chair has a lifting function, do it once again in the lowest position.

C. After the test, the chair functions normally. All functional problems are considered unqualified

B. If the chair has a lifting function, do it once again in the lowest position.

C. After the test, the chair can't appear structural changes and unpredictable damage, but the functional problems are acceptable.

1 chair flat on the test bench and fixed;

2 If the chair has lifting function, adjust to the highest, and the other adjustable functions are adjusted to normal use. 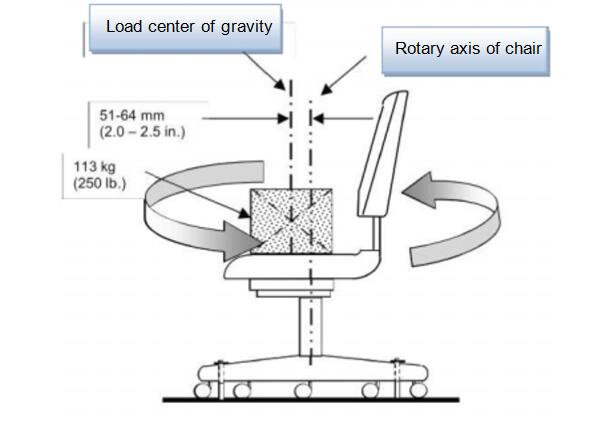 5 test requirements are as follows:

1. Seat with lift function, turn 60,000 times at the lowest point and highest point

Description: This test is applicable to chairs with adjustable back angles for Class I and Class II. Through the testing of the organization, its ability to resist wear and metal fatigue was verified.

1 chair fixed on the test platform

2 Adjust the seat to normal use 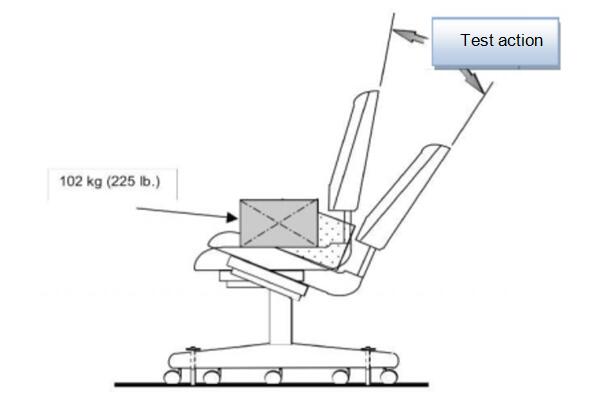 Test the chair 300,000 times at a rate of 10-30 times per minute, and adjust the chair appropriately if necessary during the test

After the test, the agency can use it normally and there is no abnormal function. Otherwise it is deemed as unqualified

1 Place the chair on the test bench and fix it. If there are wheels, adjust the wheels to the least stable condition (usually 90° to the foot)

2 If the chair has a lifting function, adjust the height to normal use.

Note: Nylon nets and flexible plastic seats are not considered cushion materials, so apply a cotton pad to increase the thickness for testing. 6 The function of the chair is normal after the test. If there is abnormality, it is unqualified.

1 After the impact test is completed, perform a seat angle loading test