Thermal shock chamber can simulate changes in the environment of high temperature and low temperature instantly between. In order to determine the reliability and stability of parameters such eligibility. Will be provided to you to predict and improve the quality and reliability based products. Thermal Shock Chamber for the detection electronics, automotive, rubber, plastics, aerospace technology, military technology and advanced communications equipment and other products under repeated thermal resistance changes.

In order to achieve the test conditions, thermal shock chambers must be humidification and dehumidification operation, we  have a variety of methods used in more humid chamber for analysis, pointing out their advantages and disadvantages, and recommended use condition.

Thermal Shock Chambers humidification process is actually improving of water vapor partial pressure, the first way is to humidification chamber wall spray water by controlling the temperature of the water surface saturation pressure under control.Water tank wall surface to form a larger surface, the surface of the box in this way by diffusion added to the vapor pressure inside the chamber so that the relative humidity increases, this approach appears in the fifties of last century.At that time, humidity control is mainly used mercury-type conductivity meter electrical contacts simple switching regulator for large hot water tank temperature hysteresis control adaptability poor, so the longer the transition process control, can not meet the alternating hot and humid requirements for humidification needs more, more importantly, is to spray the tank wall when a drop of water inevitably pour in the sample for the test form different degrees of pollution.While inside there are certain requirements for drainage. So we adopted early on steam humidification humidification and shallow dish, although the longer it controls the transition process, but the system is stable humidity less volatile, more suitable for Damp heat test. Also in the process of humidifying water vapor but will not increase the thermal extra heat in the system. Also, when the water temperature control spray to make a point below the temperature of the test requirements, the spray water with dehumidification. 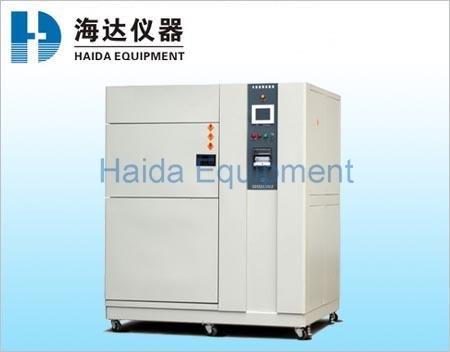